Hanoi Vietnam – 22nd March -24th March
We arrived in the evening and checked into our hotel in Old quarter. The weather was cool, 17 degrees, grey skies and threatening rain. A nice change from Thailand. We instantly liked Vietnam, our first impressions where of green fields, a vibrant city, fast pace, efficient people, excellent food. We put on some heavier clothes, and went out for something to eat and a look around the city. We walked through the markets in Old Quarter. Hanoi is a busy city with alot of motorbikes; it is crazy how so many motorbikes and scooters manage to navigate around the city without causing many accidents. We learned drivers signal to each other by beeping the horn to alert nearby walkers, cyclist or other motorists to look out and avoid any sudden movements in their direction. 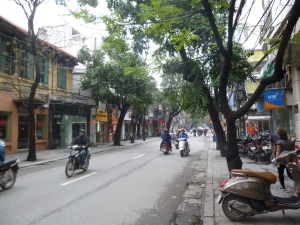 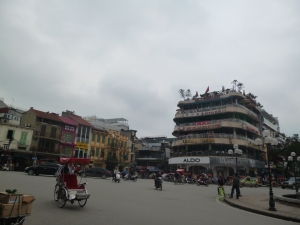 The following morning, we walked around to see the sights, the weather was dry although skies grey and still showing signs it might rain. St. Joseph’s Cathedral was around the corner from where we were staying in Old Quarter. We stopped to look at the church, Sunday mass had just started so we went in for the hour. Mass was in English. There was a choir, a piano and organ going. The church was very nice, built in 1886. 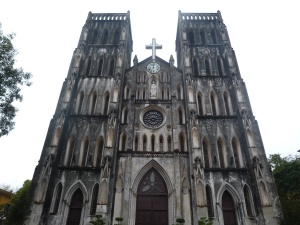 After, we walked to the Army museum which displayed a lot of Soviet and Chinese equipment along with French and US made weapons captured during the years of warefare. The tour was interesting and we learned more about the French and the American wars in Vietnam. 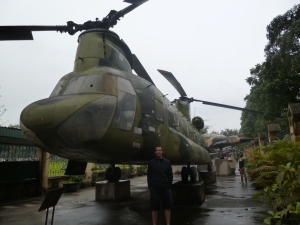 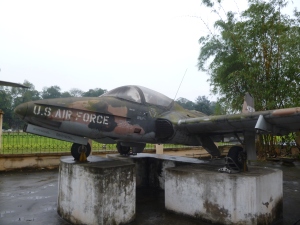 After the museum, we went to see the Ho Chi Minh Mausoleum (burial place) and watched the guards. Ho was a famous communist held in high regard by the Vietnamese people for helping remove the colonisation of Vietnam. He died in 1969 and buried here. It started to downpour rain in the afternoon so we headed back to our hotel to change. That evening, we went to the Cinema to see a 3D movie Need for Speed. The movie was good, in English with Vietnamese subtitles.

The next day, we had a relaxing day walking around Hanoi. The city streets are interesting, as retailers on a street sell the same product. We walked past shoe street, tile street, clothes street, lamp street etc. The streets used to be called by the product on sale but now there are proper names given to the streets, the layout is very convenient! We walked around the Hoan Kiem Lake which was very pretty. The day was dry and cloudy. We also walked to the nearby Tay Ho (West Lake). We stopped off for dinner at Gecko’s who had all day good happy hour on beers. The city was busy, alot of local people hanging around by be lake, they looked harmless.

Our pub crawl through Hanoi was going well until I spotted a lovely old local lady selling french baguettes on her street stall, i stopped to snap a pic and she barked at me. Undeterred, we called into a nearby bar for Irish coffees and on the way out I caught her offguard while she was pulling on a cigarette, so i leaned into her calling “Lovely Baguettes”. She smiled before realising who it was but by that stage we were gone. Unfortunately i never got the pic. 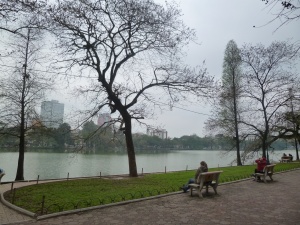 One thought on “Hanoi, Vietnam”