We stopped in the town of Hue for a couple nights. We didn’t plan many activities around Hue instead, we planned the easy rider tour route. I also got my hair colored and got a manicure/pedicure in preparation for our upcoming trip. Hair turning a nice shade of red rather than Brown but at least it isn’t purple!

We decided to book an easy rider tour with a travel agency in Hue. We chose the route Hue to Hoi An via the Ho Chi Minh trail. Our guide Ty is local who has 9 years experience doing the easy rider tour. He had great English and was very informative throughout. We set off early on the 30th March to Le Duan which was 210km away inland towards the laos boarder. We were taking the scenic route; we stopped for some drinks and lunch by the beach before heading to the very impressive Vinh Moc Tunnels – 2km of underground tunnels built during the American bombing campaign. 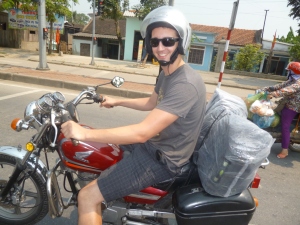 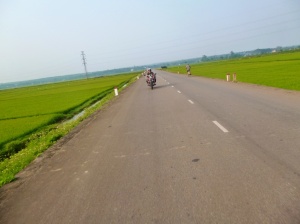 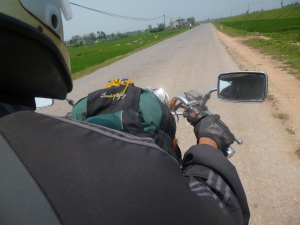 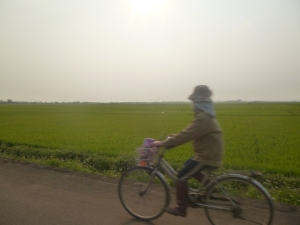 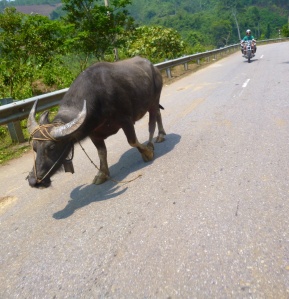 Ty gave us a tour of the Tunnels, he mentioned the area was heavily bombed by the the American’s during the war. We could see many hollow areas in the land which shows the outline of where the bombs hit the village.There were trenches that ran through the village, these were used by the village people as an escape route to the tunnels if they heard planes while out working during the day. They would jump into the trenches and follow to the tunnel entrances. At nighttime, the locals slept in the tunnels. The tunnels have spaces for families to live, all very small. There was also many wells underground, meeting rooms, a maternity area and an area to hold weapons. There were many tunnels exits throughout the tunnels which went 25m deep. During the winter, the locals could only go 15m deep into the tunnels as the lower area were flooded. It was interesting to see how little room they had underground and to learn so many families stayed here. 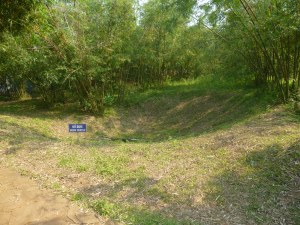 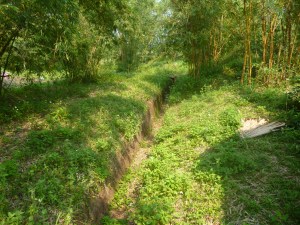 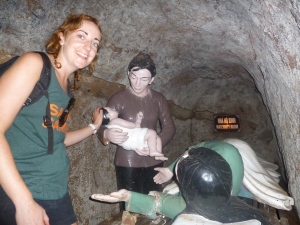 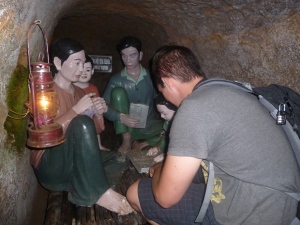 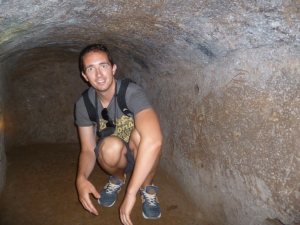 Space used to house one family at night!

After this, we continued on our way, the temperature was lovely about 30 degree so it was perfect temperature for sitting on a bike. We continued inland towards the DMZ (demilitarised zone and boarder between north and South Vietnam) and headed for the Laos boarder to the town we were staying for the night. Ty took us out for dinner which consisted of chicken rugby ball – a steamed chicken covered in sticky rice and deep fried. Ty had rang ahead to tell them to kill the chicken. The meal tasted fine, it is one of Ty’s favorite when visiting the area as this delight isn’t available everywhere – shame! 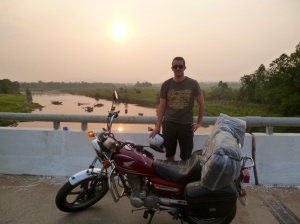 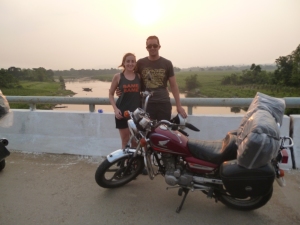 Next day after a tasty omelette for breakfast, we hit the road to get to a town called Prao. Another day of driving and covered about 210km today also. Today is also Patrick’s birthday so looking forward to getting to Prao to celebrate later. We started the day with a visit to Khe Sanh, the American headquarters during the war. They had a couple of helicopters, tanks, a plane and remakes of a bunker. There was a short landing strip there. 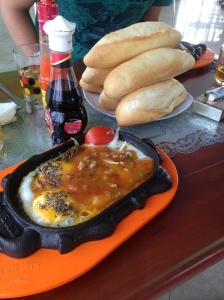 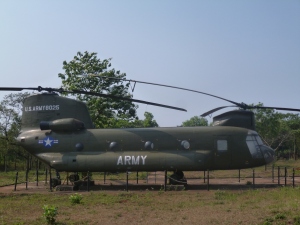 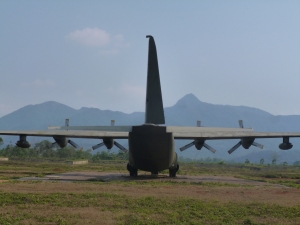 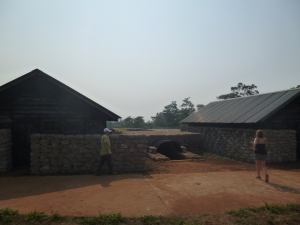 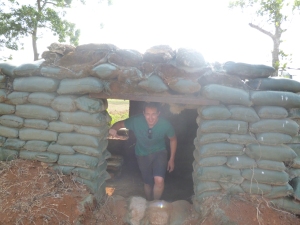 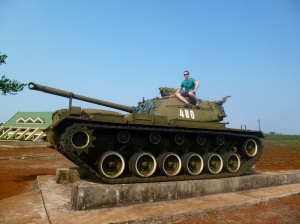 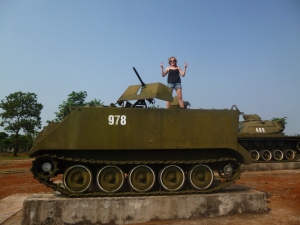 After this tour, we started on the actually Ho Chi Minh Trail down to Proa. The road was a little worn, through the mountains with many twists and turns. It was a nice journey as we were not going fast on the bikes so we enjoyed the scenery; we passed some small villages along the way. We stopped regularly and once at a waterfall, excellent scenery all the way. We ended in Proa later that evening, 30 minutes before reaching the town it started to rain heavy. We pulled into a village just in time and had a drink while we waited for the rain to pass. When it did, we carried on and reached the hotel about 6pm and settled into the hotel. Later, when we went downstairs for dinner Ty asked us for our room key and after a few minutes he came back and asked us to go upstairs to our room. Strange we thought but followed the order and when we got into the room he had a birthday cake lighting waiting for Paddy. We were laughing; it was a funny place to present it. We took it downstairs and everyone sang Paddy happy birthday, we had the cake after dinner which was yum! 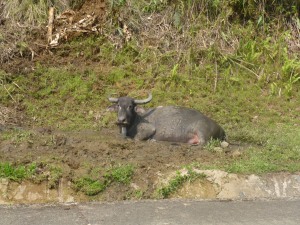 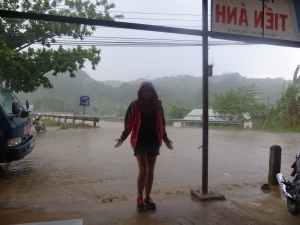 Next day, we stopped at a tribal village first where they wove table mats, bags and other items out of fabrics. We worked our way out of the mountains and to the town of Da Nang.  We stopped at lovely China beach for a quick swim and down to the marble mountains to see some caves and pagodas. The last leg of our tour, we cruised into Hoi An about 3.30pm. Ty waited whilst we found a hotel to stay (we found a nice one with a pool for Paddy’s birthday). We said our goodbyes and checked in. We both really enjoyed the trip, a great adventure through the country. 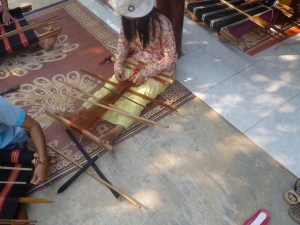 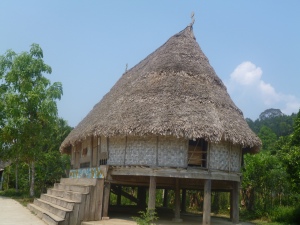 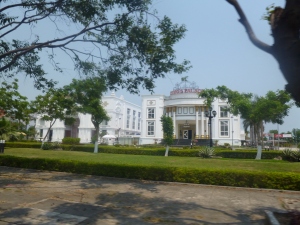 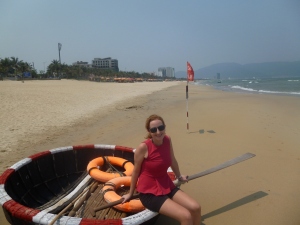 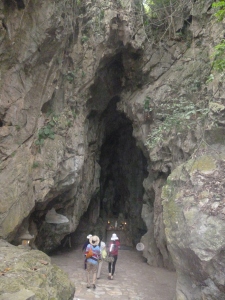